July 12, 2021
Agitators of the Peace A Civil War Book Review Frances Seward, Harriet Tubman and Martha Wright KENT BARTON FOR THE WALL STREET JOURNAL In the turbulent decades leading up to the Civil War, it could be said that the moral center of the nation rested in the Finger Lakes region of central New York state. The district was a hot spot of abolitionism and the fledgling women-rights movement. Rochester, on the region’s western edge, was home to Frederick Douglass, ex-slave and celebrated orator, who published his abolitionist newspaper, the North Star, in a church basement. The village of Seneca Falls, on Cayuga Lake, was the site of the first women’s rights convention, in 1848, with its seminal Declaration of Rights and Sentiments. A medical school on Seneca Lake was the first to award a degree to a woman, Dr. Elizabeth Blackwell. Our celebration of seasonal books on topics like nature, gardening, food and baseball—plus David Hockney in France, Richard Thompson’s musical memoir, ‘The Agit
Post a Comment
Read more
July 12, 2021 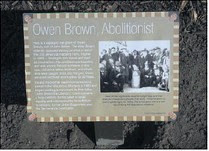 Speaking again of John Brown: Abolitionist’s gravestone returning By Annakai Geshlider ageshlider@scng.com   After years of preservation efforts by the Altadena community, a gravestone honoring abolitionist and former Altadena resident Owen Brown will soon be reinstalled at his gravesite in the foothills north of town. “We’re really glad it’s finally happening,” said Michele Zack, a local historian and chair of the Owen Brown Gravesite Restoration Committee, which was created by the Los Angeles County Board of Supervisors. Owen Brown was the son of John Brown, the abolitionist who led the pre-Civil War raid at Harper’s Ferry, Virginia, in 1859. According to local historian Paul Ayers, Owen Brown stayed across the Potomac River during the raid, taking care of horses in preparation for a planned getaway and slave rebellion. Instead, the raid failed and John Brown was hanged for his anti-slavery attempts, prompting his son to flee to Ohio. He lived as a fugitive for 20 year
Post a Comment
Read more
May 06, 2021 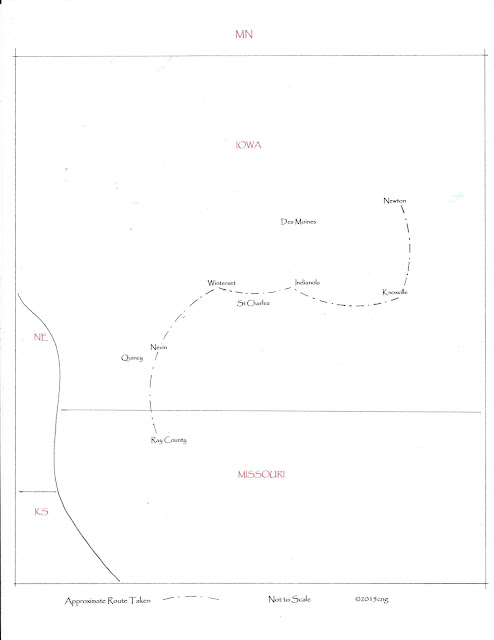 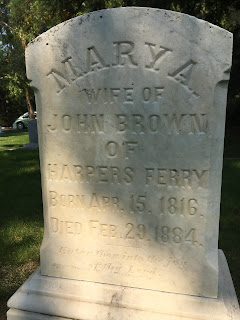 While on the subject of John Brown, it's interesting to note that his widow, Mary, is buried in the Madronia Cemetery on Oak St. in Saratoga, CA. A couple years ago while visiting friends up there, I took this photo. I'm going to continue the subject of Abolitionists for the next couple Posts.
Post a Comment
Read more
May 01, 2021 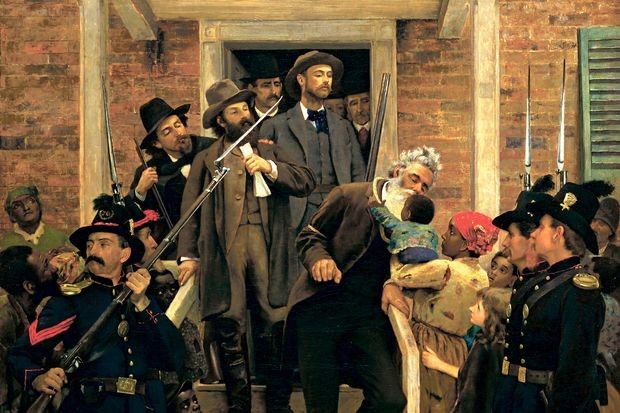 From the Wall Street Journal On-line  1 May 2021: Five Best: Novels on Slavery and the Civil War Selected by Dorothy Wickenden, the author, most recently, of ‘The Agitators.’                           Thomas Hovenden’s ‘The Last Moments of John Brown’ (ca. 1884).                                            PHOTO: VCG WILSON/CORBIS/GETTY IMAGES   By  Dorothy Wickenden, April 30, 2021 The Good Lord Bird By James McBride (2013) 1.  James McBride’s John Brown is a Bible-thumping, “low-down son of a bitch,” a murderous zealot who looks “mad as a wood hammer” and whose infamous militia consists of a dozen of the “bummiest, saddest-looking individuals you ever saw.” These are the early observations of the narrator, Henry Shackleford, an enslaved boy whom Brown mistakes for a girl and sweeps up in the wars of Bleeding Kansas. Henry “weren’t for no fighting,” but he accompanies Brown across the U.S. and into Canada as Brown flees the authorities and attempts to raise money and
Post a Comment
Read more
April 22, 2021
By  Mark Edmundson April 15, 2021 11:30 am ET As printed in the Wall Street Journal Walt Whitman and the Fight for Democracy   When Walt Whitman began conceiving his great volume of poetry, “Leaves of Grass,” in the 1850s, American democracy was in serious danger over the issue of slavery. As we celebrate National Poetry Month this month, the problems facing our democracy are different, but Whitman still has a great deal to teach us about democratic life, because he saw that we are perpetually in danger of succumbing to two antidemocratic forces. The first is hatred between Americans, which Whitman saw erupt into civil war in 1861. The second danger lies in the hunger for kings. The European literature and culture that preceded Whitman and surrounded him when he wrote “Leaves of Grass” was largely what he called “feudal”: It revolved around the elect, the special, the few. Whitman understood human fascination with kings and aristocrats, and he sometimes tried to debunk it. Bu
Post a Comment
Read more
January 14, 2021
Chris' Literary Works     From Blue to a Gold Star Go to: http://blurb.com/bookstore With a young family and bright career future ahead of him, First Lieutenant Clarence R. Green meets his destiny in a trench somewhere in France during the First World War. From 100 years ago, local newspaper articles, his letters home and family photos tell Clarence's story. A story of heroism and self-sacrifice. A story of a small Iowa town's courage amid the anguish wrought by war. Read the First-Person accounts that changed a family and a community. Letters Home: Viet Nam 1964 Go to: http://blurb.com/bookstore Letters Home: Vietnam 1964 is framed around an Army Corpsman’s letters home from the nascent Vietnam War. Little has been written about the U.S. Army Medics doing MEDCAP work in Vietnam. This story of medical teams in the Delta region is told through photos, v
1 comment
Read more
More posts